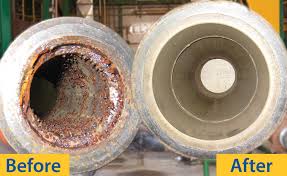 Buildup inside a pipe both reduces liquid flow through the pipe, as well as reduces thermal conduction from the liquid to the outer pipe shell. Both effects will reduce the pipe's overall thermal efficiency when used to generate steam. Refer to Figure 1.

Deposits in tubes are caused by Calcium Carbonates, Calcium Sulfates, Magnesium Oxide, Copper Oxide, Copper Carbonates, Iron Oxides, Oxalates, Iron Hydroxide, Aluminum Oxides, Magnesium Hydroxides, Aluminum Silicates, and Phosphates. If left untreated or uncleaned for a certain length of time there will be thermal loss but can eventually lead to pipe failure as shown below in Figure 2.

NorAg Technology manufactures different solvents that dissolve these deposits under controlled conditions. Contact us for required solvents to use for removing scale.

Scale deposition is a phenomenon that can occur in all pulp and paper making processes. It is an unwanted occurrence that causes a number of operational problems such as plugging of equipment, inefficient usage of chemicals, increased utility costs, lost production due to downtime, corrosion, and downgraded products from increased dirt counts. NorAg Technology manufactures products that dissolve much of the unwanted scale to protect evaporators and tubes from scale build up and corrosion.